This is a unique quartet improv from four musicians with such varied interests that even fans familiar with all of them will be unable to predict quite what this disc sounds like. The language-defying title gives some hint of the odd vibe at work here, as these adventurous players craft a sparse, impenetrable landscape populated with inscrutable sounds. One wouldn’t think that Mattin’s blistering laptop feedback could blend so effortlessly with the droning sax of Guionnet and Denzler, or that Unami’s clattering computer-controlled motors would work so well set against his partners’ more static contributions. This is a truly challenging work, addressing modern ultra-minimalist improv with stretches of silence or near-silence, but also flowing into passages of delicate but sustained interaction or noisy aggressiveness. This disc is perhaps representative of one path back from the brink of pure silence for many modern improvisers who have headed in that direction.

One says : "1 computer and 1 saxophone have nothing to do with each other."

"2 computers and 2 saxophones have no more to do together."

"Does one say that because computers and saxophones have nothing in common ? Because they have nothing to share ? Is that enough to infer such an extreme conclusion ?"

"But a computer has nothing to do with another computer... And it’s the same with 2 saxophones. It’s not because they have the same name that... One can even say that 1 saxophone has more to do with 1 computer than with another saxophone."

But then another one tries to conclude :

"No ! As a matter of fact, it’s because things have endlessly nothing to do with each other that they have much to do together : they can never be in the very same place even if they hardly try to do so, that’s why it’s working more than well beetween them 4."

And, after a while, a crowd of ones and others say :

But what do you mean when you say that they should have to do with each other ?

What is this thing they would have to do ?

What are you talking about ?

This is possibly what our music is all about.

4 musicians, 2 computers, 2 saxophones. From the Basque Country, France, Switzerland, Japan. First meeting as a quartet on September 30, 2004, 9 pm, at Les VoÃ »tes, in Paris, for 66 minutes. First CD -/ :. on fargone records, USA. A very special music, UFO-like. A tense space where anything can happen. But doesn’t necessarely do so. So far they managed very well to brake with previous traditions such as the plinky plonk or reductionism. There is a lot of talk about electroacoustic improvisation. But these musicians do not follow trends, they are going their own way into the unknown... 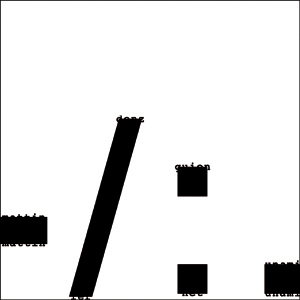 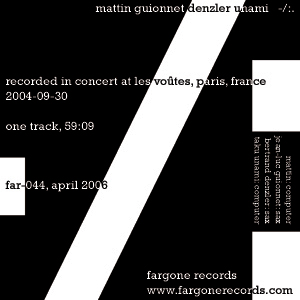