[â€¦] Two of the recordings on AxÃ¨ne were recorded 10 years ago and were never released. After first hearing them I was amazed that the have never been heard by the public. They are absolutely brilliant recordings that the public has unfortunately missed out on for all these years. I am very proud to bring these recordings to the surface for all to hear.

AxÃ¨ne is catagorized as Series I, but don’t let that fool you. While a good part of this CD is rather quiet, it does build to a fever pitch while never losing its smoothness. Erik Hoffman

"It is a little strange to find a CD by French electroacoustic artist Jean-Luc Guionnet on the noise label Ground Fault, but then again musique concrÃ¨te can be seen from an avant-garde noise perspectives. The three extended (16 to 28 minutes) works included on AxÃ¨ne were created between 1989 and 1996 and had not been released before. In "Ivraie/Baragnes, " recorded for an AndrÃ© Almuro film by the same title, and "Ressac/Ressac", the composer favors textures over plasticity. Both pieces have drones, water and wood sounds, at their basis. Non-linear, these sound events are meshed together to form the soundtrack of a trek of some kind. Concrete and synthesized sounds intervene, arousing new imageries. "Ressac/Ressac" is embedded in a strong ocean theme (ressac = undertow), waves of sounds slowly approaching to gracefully come crashing at the listener’s feet. Slotted between these two works, "AxÃ¨ne" becomes all the more academic and cold. This piece follows more traditional esthetics of sound sculpting, INA-GRM-style. It lacks movement and ambition to really captivate. But the two longer pieces are definitely worth hearing, especially for those favoring atmospheric electroacoustics" FranÃ§ois Couture 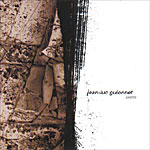